The Chapel dates from 1873 but a chapel has been at the centre of village life since Nenthead, as a model village, was founded by the London Lead Mine company in 1753.  The outcome of the restoration project has reinvigorated this community centric facility and thereby safeguarded a precious local landmark.  The chapel project has made the village of Nenthead a destination on the busy coast to coast road as well as an important attraction in the North Pennines area.

The external envelope of the building saw significant work with the roof was re-slated with a mix of new and reclaimed slates, the walls were re-pointed in lime mortar, dressed stone details were repaired and the timber window frames were all removed and sensitively repaired prior to re-installation.

The intactness of the interior has been retained as far as reasonably possible whilst still allowing for sensible conversion and sympathetic intervention.  The ornate plastered ceiling on the first floor was repaired and lost sections reinstated to exactly match existing profiles and details using traditional techniques.

The existing walls were repaired using lime plaster where damp had weakened the original material causing failure.  The first floor was in worst condition and this is where most plaster repairs were carried out.  A new decorative scheme was implemented using sympathetic, breathable, paints that were informed by historic decoration research utilising on-site analysis and laboratory testing.  The internal metalwork of balustrade, communion rail and columns were redecorated, being steered by the historic decoration research.

The overriding design intention was to retain as much of the intact interior as possible, not just its individual features but also its collective layout.  Intervention was minimal and the openness of the space within the chapel was maintained.

On the ground floor the main space became the café area with loose tables and chairs in place of the pews, the majority of which were removed.  The serving counter was constructed from recycled pew backs and some of the pews were shortened in length to create robust bench seating for larger groups; wet walkers and cyclists!  A new extension was constructed on the north (rear) side of the chapel to house the new kitchen so that the interior spaces were not interfered with.  The upper floor, a raking gallery, had its floor levelled off so it could be used for flexible seating and a gallery space.  New meeting rooms and workshops were created using contemporary styled glazed screens. 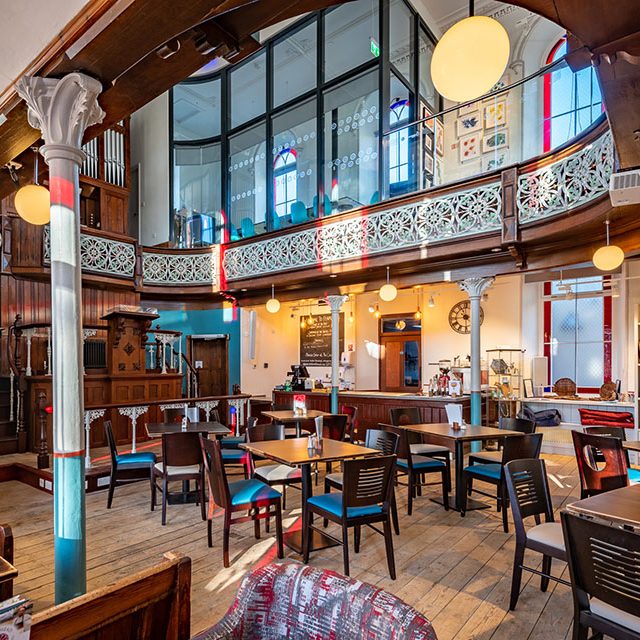 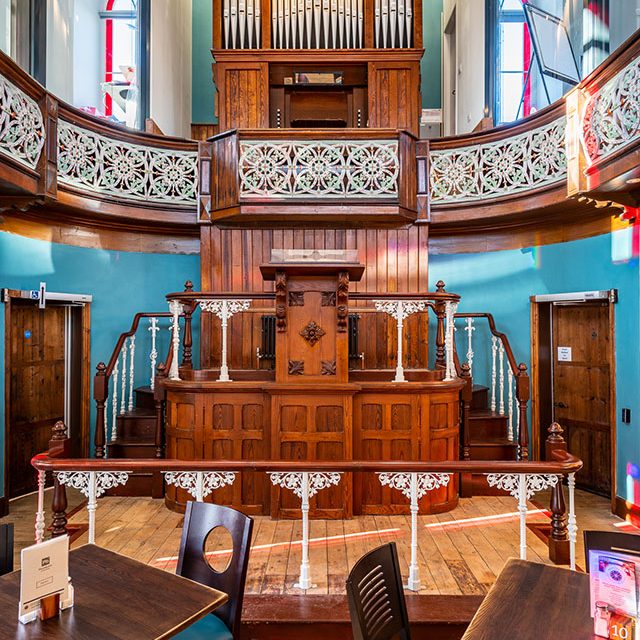 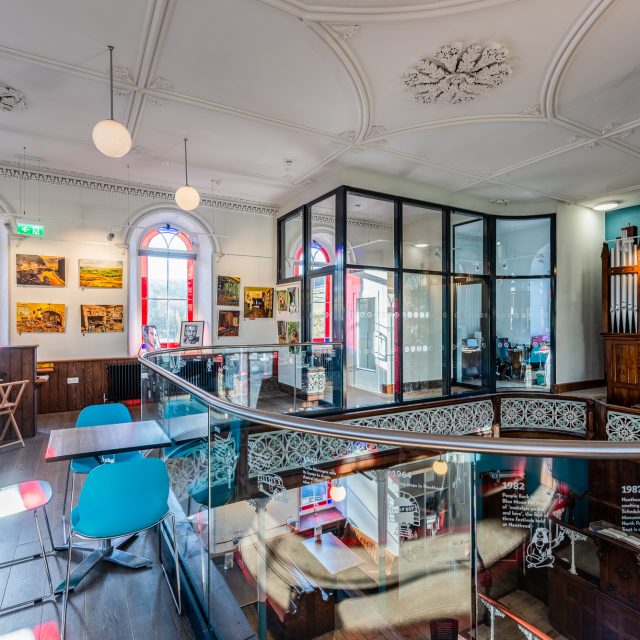 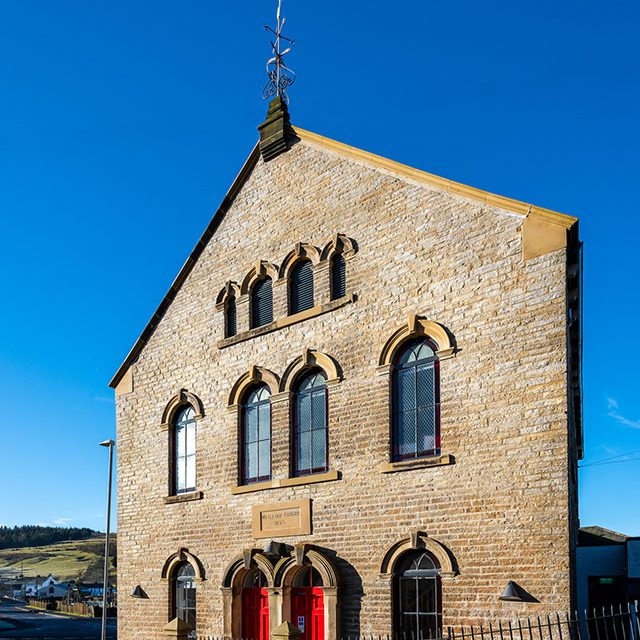 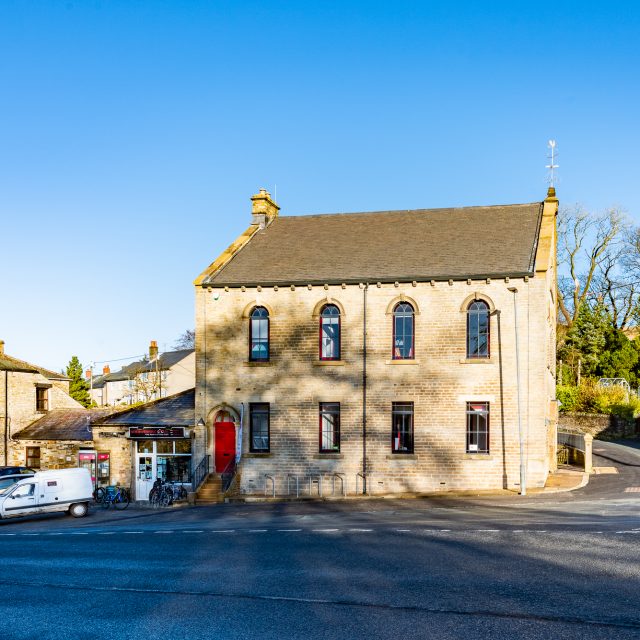 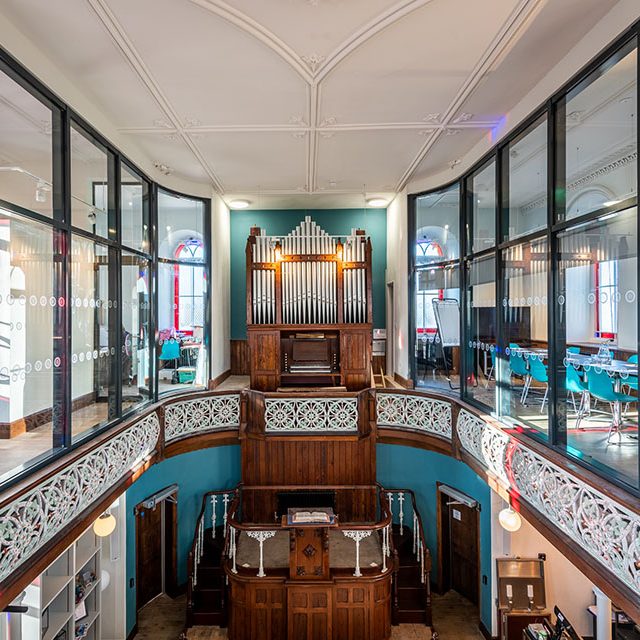 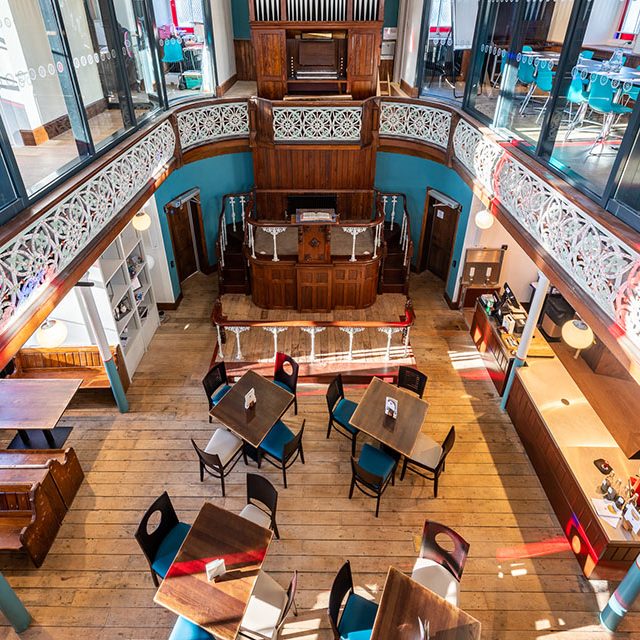 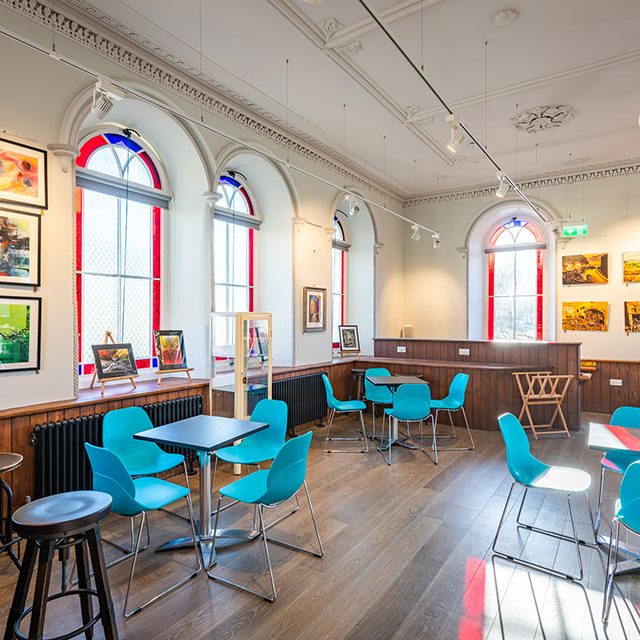 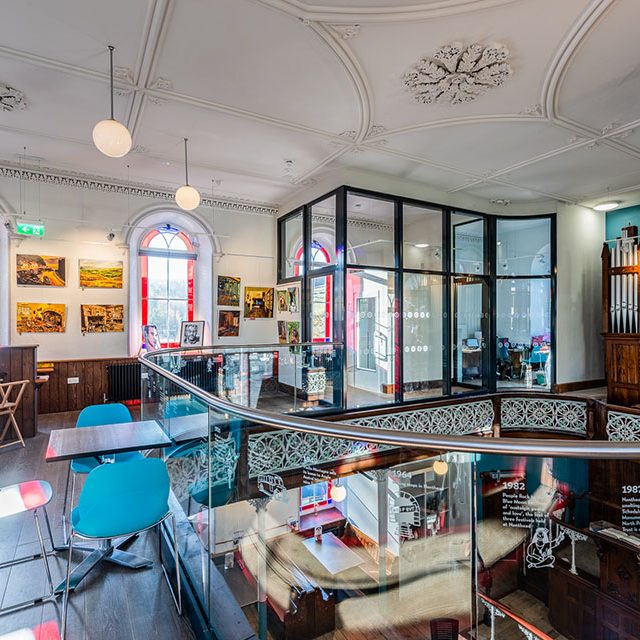 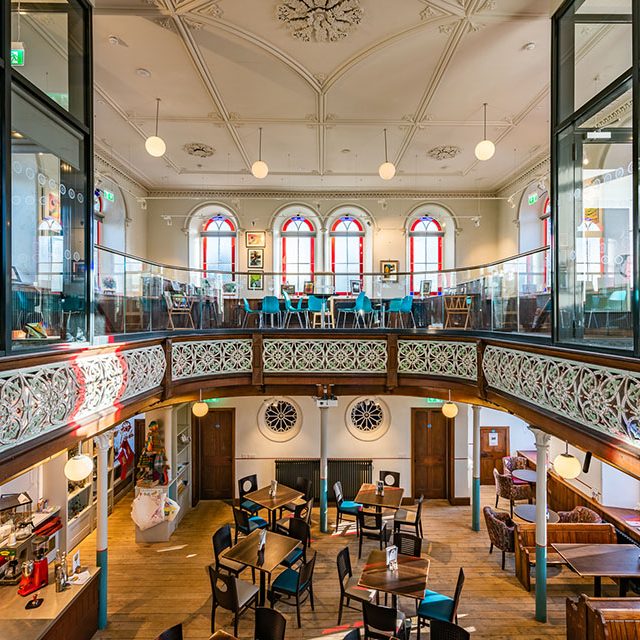 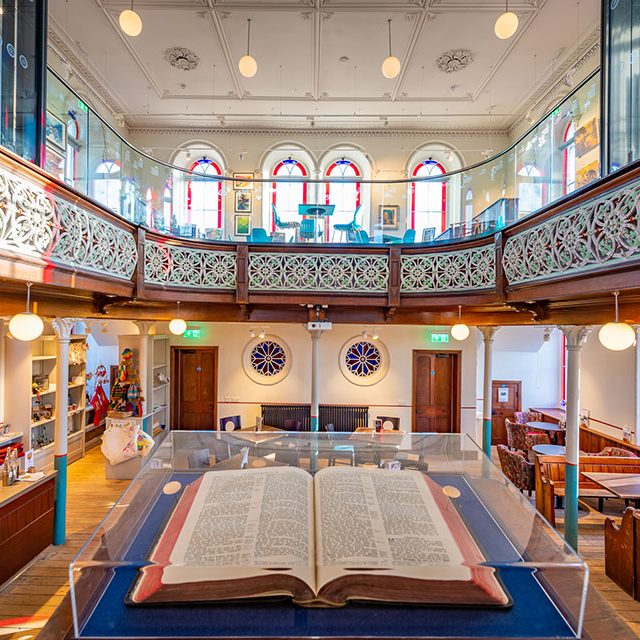 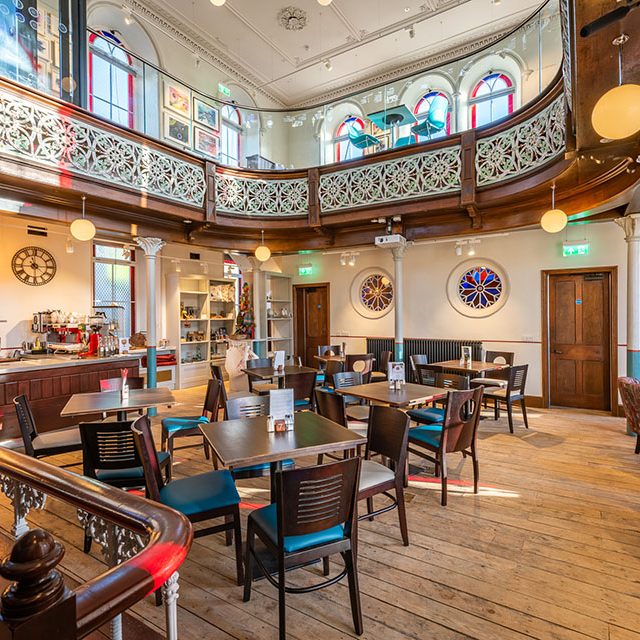 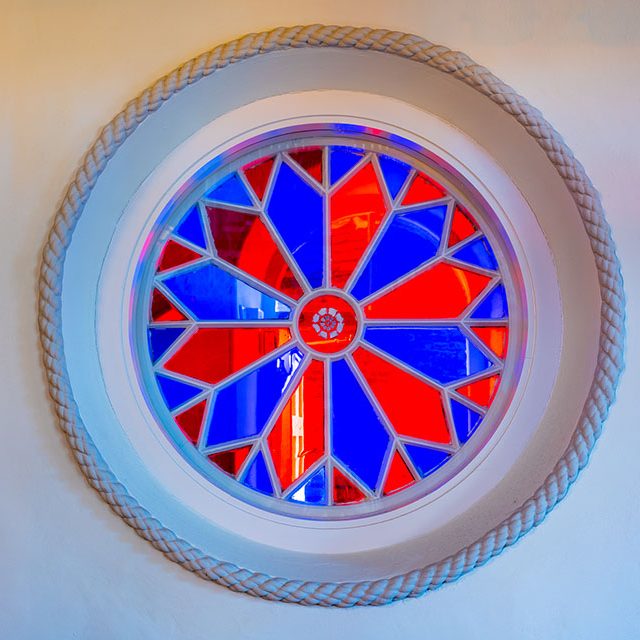 The condition of the chapel prior to the works commencing

The chapel was in a semi-ruinous state after 15 years of neglect and lack of basic maintenance. The external shell was just starting to open up as holes were forming in the roof coverings. Luckily, the superb quality of the original timber roof and floor structures saved the building from more serious damage and practically all of the building fabric, with the exception of some internal plaster, could be salvaged, consolidated and repaired. 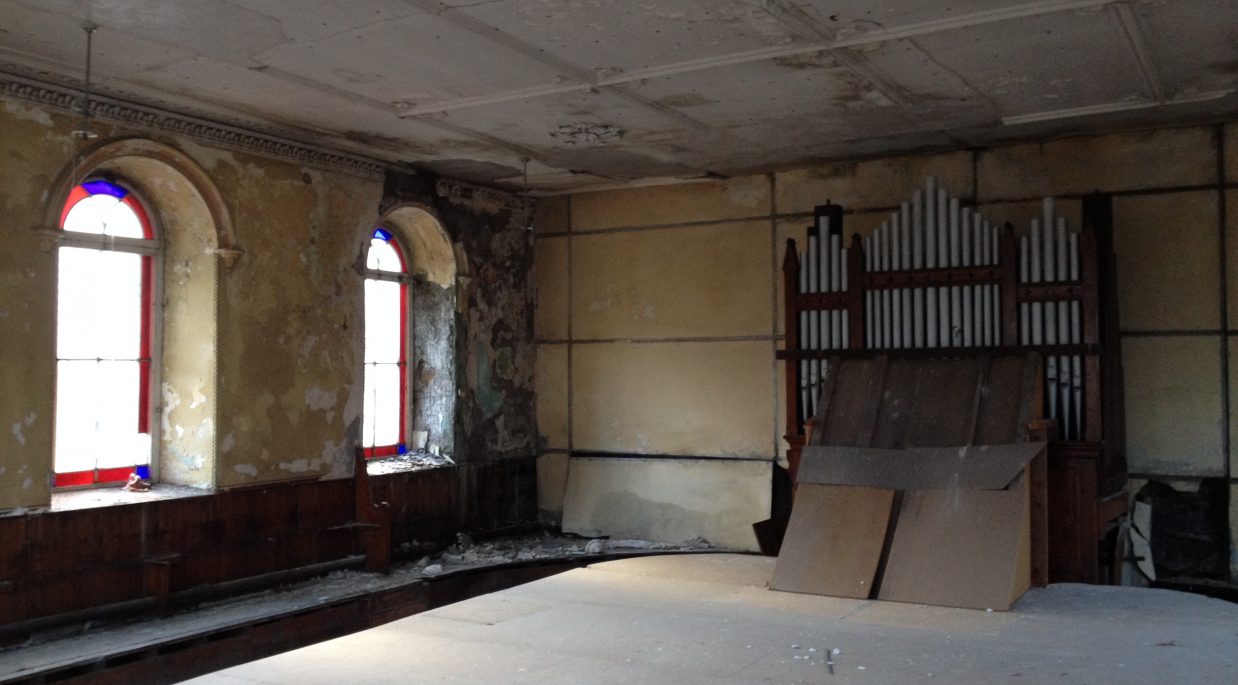 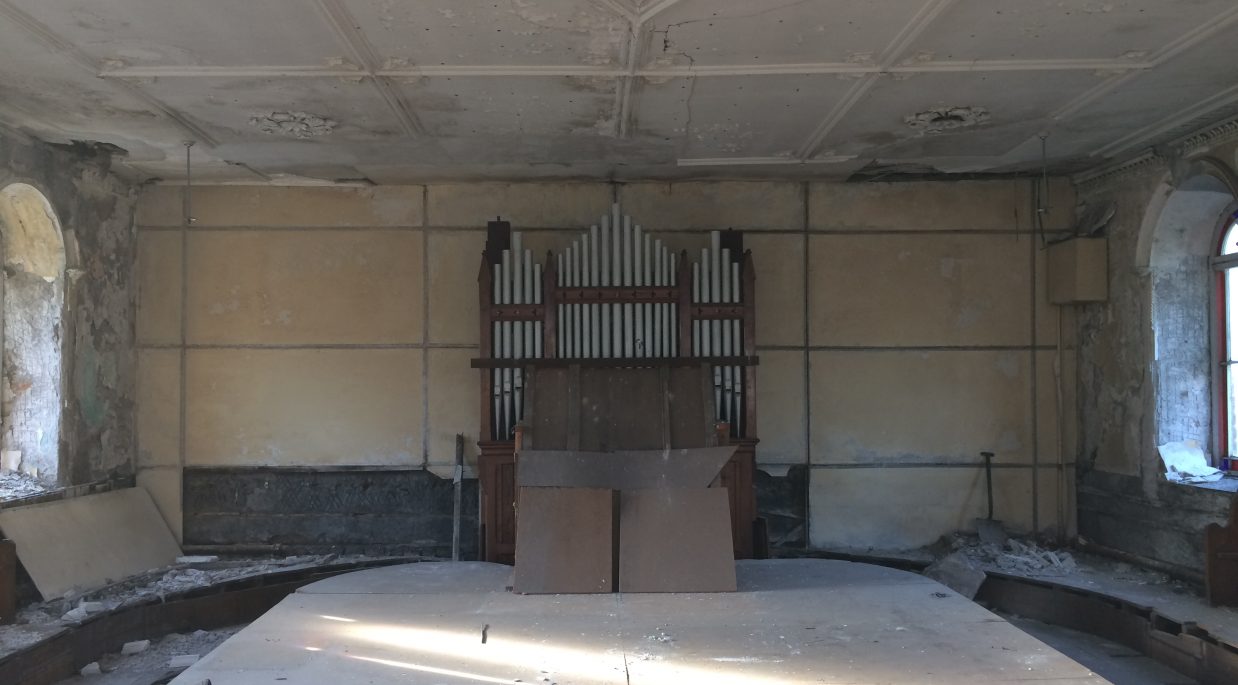 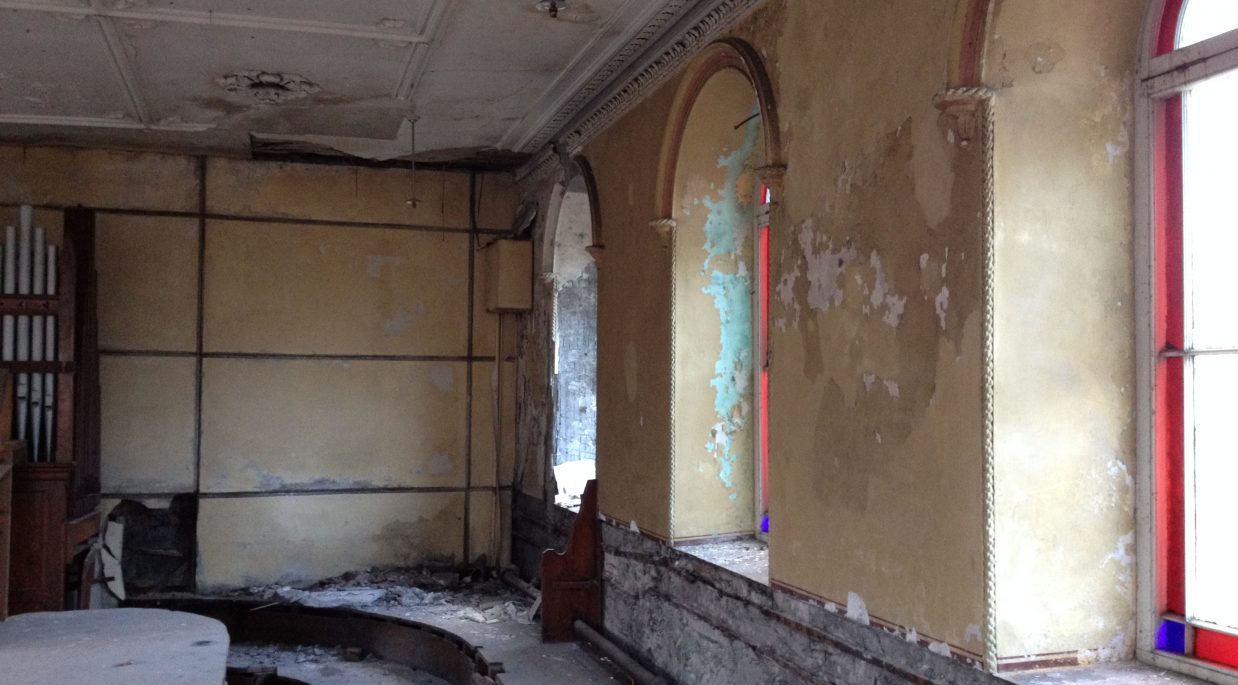 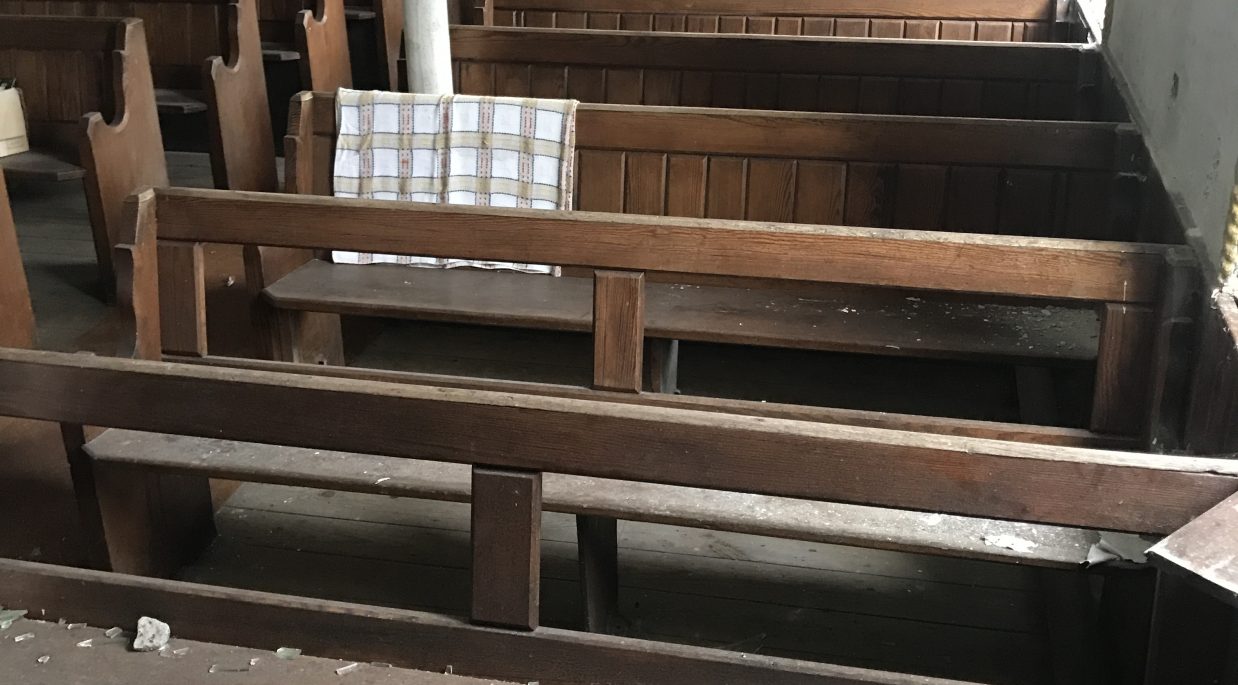